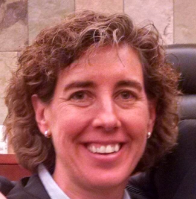 Jennifer Faber was appointed as a Judge by Governor Rick Snyder on October 27, 2014. She was elected for a full term in November 2016.

Judge Faber is a 1999 cum laude graduate of Thomas M. Cooley Law School and was admitted to the State Bar of Michigan that same year. Prior to joining the bench Judge Faber worked as a general practice attorney for 15 years. She served as Managing Partner at Sherlund, Faber & Van Meter, PLLC, where Judge Faber appeared in Circuit, District and Probate Courts throughout West Michigan, handling cases involving family law (custody, divorce, abuse, neglect and delinquency), probate, general civil, landlord/tenant and both felony and misdemeanor criminal cases. She also served for 10 years as a Special Assistant Attorney General. Her litigation experience involved nearly every type of case that passes through the District Court.

Judge Faber was born and raised in Grand Rapids and has a strong commitment to the community.